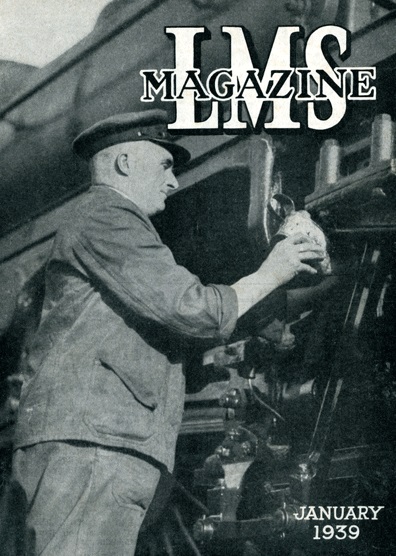 A Railway Education: learning ‘how it works’

The railway included lots of different jobs and departments as well as the people who actually built and drove the engines. Training including practical ‘on the job’ work and learning technical information. Other topics that might be studied included railway accounts, geography, economics and law.

Railway workers were encouraged to attend lectures and mutual improvement classes to keep improving their knowledge. This page from a 1937 issue of the ‘LMS Magazine’ reports on some recent lectures given on topics including “the compound engine”, “the exhaust injector” and “engine failures and remedies”.

This model was used at ‘mutual improvement classes’ to teach drivers and firemen about how a locomotive’s motion worked. ‘Motion’ describes the parts that make the locomotive move, including pistons, connecting rods and valve gear. The steam moves the pistons, which move the connecting rods and turn the wheels.

This photograph shows some of the motion on ‘Duchess of Sutherland’.

This book contains training notes made by J. Martin, a locomotive driver based at Colwick, Nottingham. This page refers to different whistle patterns used by drivers, for example to let a signalman know if they had passed a fire by the railway line.

Published by the British Transport Commission

Locomotive Firemen had often started their career by cleaning the engines and gradually worked up to train as a fireman. They would learn ‘on the job’ by working closely with the driver, but there were also teaching materials such as this booklet.

Everybody working for a railway company was expected to learn and follow the rules. This covered how employees should behave and also the practical side of how the railway operated.

This is the Lancashire and Yorkshire Railway ‘Syllabus of Examination for Applicants for Appointment as Junior Clerks’. The railway clerk was a type of office job and required a detailed knowledge of how the railways worked. Exam subjects to be studied included English, Geography, Shorthand and Arithmetic.

This certificate was awarded to Mr R S Speak in 1934 for passing his ‘1st Year Coaching’ course. Mr Speak was a clerk at Horwich Railway Works from the 1930s to the 1960s.

This notice was taken off locomotive no. 6233 ‘Duchess of Sutherland’. It warns that “a strong smell like garlic means a hot inside big-end”. The ‘big end’ is a mechanical part of a locomotive at the end of a connecting rod. A glass ‘stink bomb’ containing garlic (or aniseed) was fitted, which would break if the metal started to overheat. Do you think that garlic would be an easily recognised smell?

Steam locomotives rely on gauges to measure important things like the pressure of the steam in the boiler. It is essential to know that these gauges are operating correctly, so equipment like this could be used to test them. This boxed test kit consists of a hand-pump and various couplings to allow it to fit to a number of different gauges on the locomotive. The pump could be used to apply pressure to check for smooth movement of the gauge or to cross-check against another gauge. This kit is marked ‘W.A. Stanier C.M.E., Central Shopping Bureau, Euston, LMS’ inside the lid. This suggests it once belonged to William Stanier, Chief Mechanical Engineer of the London, Midland & Scottish Railway.

This collection of tyre gauges was used to measure the amount of wear on a railway wheel. The wheels on a steam locomotive have a removable steel outer rim called a ‘tyre’. These make contact with the railway track as it moves along. The wheels have ‘flanges’ on their inner edge, which keep the locomotive on the track and help it steer around bends. The ‘profile’ of the tyre (the shape of its cross-section) is important to smooth running and has to be regularly checked. This set of measuring gauges is used to check the profile of the tyre as it wears down during use. The items include a ‘clock-gauge’ for making accurate depth measurements, and a number of ‘profile gauges’, which are placed against the tyre to check its profile against that of the gauge.

Locomotive tyres can be removed from the wheels and re-profiled by machining. If the wear is too great, a new tyre has to be fitted. The tyres are a tight fit on the wheels and are fitted by heating to expand them. The assembled tyre is then cooled, causing the tyre to shrink, to fit tightly to the wheel. Take a look at this video showing how this is done (filmed at Buckley Wells Works, East Lancashire Railway).

The regulator is the valve which controls the flow of steam from a locomotive boiler to the cylinders. You could think of it a bit like the accelerator in a car. This handle operates the valve when fitted in the locomotive driver’s cab.

This particular handle is stamped ‘6227’ – a member of the Princess Coronation Class of locomotives.

The reverser is a mechanism used to reverse the direction of travel of a steam locomotive, via its valve gear. It can be compared to the gears in a car. Apart from the basic “forward or reverse” operation, the calibrated intermediate positions allowed the “cut off” to be selected – this is the point in the piston stroke (inside the cylinders) when the inlet valve is closed. A late cut off gives maximum power to the locomotive when it is starting up, leaving the station, etc., but reduces efficiency. An early cut off means less power but greater efficiency, and is often used for higher speed running.

Whistles using steam from the boiler were an early development for locomotives. As speeds increased, a warning system was needed – it was no longer practical for a man on horse to ride in front of the train waving a red flag! Although the high pitched “shriek” whistle was often used, some design engineers preferred a deeper tone whistle. When William Stanier joined the London, Midland & Scottish Railway Company as Chief Mechanical Engineer, his locomotives were fitted with the Stanier “hooter”. Their main rivals – the London North Eastern Railway – largely stuck with a high pitched sounding whistle. The streamlined A4 Pacific locomotives, designed by Nigel Gresley, had a multitone chime whistle. This sound was an American design.

You can hear the two different whistle sounds in this video (around 2 minutes 30 seconds in). This video features 6233 ‘Duchess of Sutherland’ and 4464 ‘Bittern’.

Back to Stop! Look! Listen!
Back to Home Page